According to Joe Magsaysay, motorcycling speaks of the Potato Corner character, the important entrepreneurial lessons he wishes to impart -- being adventurous, spontaneous and free.

Don’t kid Joe Magsaysay with “Sir, pa-Vespa ka naman” for he might just take it seriously. JoMag (as he is more popularly known in the business circles), founder and Chairman Emeritus of Potato Corner, is a huge motorcycling enthusiast, a sport he fondly shares with the other owners and directors of the company.

“They are the type who would go to Caliraya riding their bikes,” says chief operating officer Dominic Hernandez (Dom for short), who joined the company three years ago. When JoMag arrived at the office riding his new motorcycle (currently, he has a total of 25 bikes), Hernandez and two others jokingly asked for a Vespa scooter so they could join their weekend rides. The following week, they got the biggest surprise of their life because parked at the office were three Vespas for them to ride in. 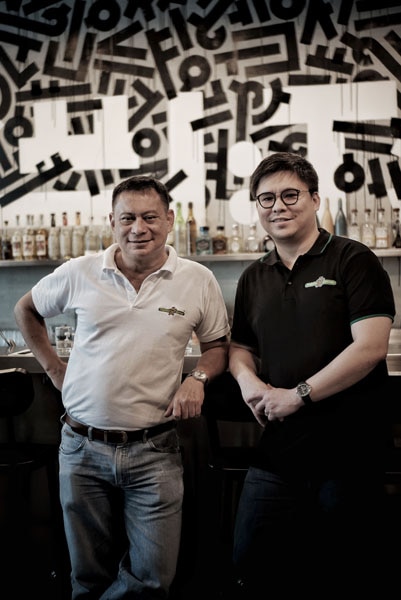 Business-wise, Magsaysay has learned to think strategically, rather than tactically—that is, providing advice and guidance to Hernandez and the management, when needed.

Riding bikes may seem like a mere pastime for JoMag, but according to him, it speaks of the Potato Corner character, the important entrepreneurial lessons he wishes to impart—being adventurous, spontaneous, and free. This mentality has apparently worked for the company over the past 28 years, with one of the country’s largest conglomerates recently offering billions to buy it. “My hope is that these values also translate to the way they do business,” he quips.

Learning from the legend

Hernandez, whose family operates Victory Liner, a top-of-mind bus company in the country, admits Potato Corner was a huge change agent for them. “We’re a very traditional and conservative group,” he admits. His family now holds majority ownership of the flavored French fried brand. “We have been in the bus business for the past 75 years and we’ve never really aggressively diversified. When we invested in Potato Corner, we saw a different world. We realized it’s good to have a different perspective on things.” Dom, whose family operates Victory Liner, one of the reputable bus companies in the country, admits Potato Corner was a huge change agent for the Hernandezes.

Hernandez feels fortunate to have been under the tutelage of Magsaysay from whom he learned the value of openness to change, especially in the age of digital economy. The former points out the challenge of running 1,400 stores, 900 of which are franchised. He says they there is a need to strike the right balance of maintaining the company’s values and being open to improvements and innovation.

“You don’t know where the risk is going to come from—there are data hacks, there’s the weather, there’s the economic crisis, all of these things are beyond our control. But whatever we can control, we try our best to elevate the level of service that we can give to the consumers and to our franchise partners,” Hernandez explains.

Hernandez intends to take care of the business the same way Magsaysay has for the last 28 years. “I never call them employees; I always refer to them as my officemates,” he says. And by treating them like family, he also means supporting their growth through continued education. “Taking good care of your people is important. Without the people, the business will not prosper.” Magsaysay shares his realization: “Dom will never be like me. I cannot make him like me. He is his own person. I have to realize that all I can do is tell him what I used to do and what Potato Corner used to be. He is his own man and I’m fine with that.”

From Magsaysay, Hernandez also learned about maintaining a positive outlook amidst challenges and failures. “The big doesn’t beat the small in business, it’s the fast that beats the slow,” Hernandez says, echoing what Magsaysay told them. “So we always have to be fast-changing, fast-adapting, fast-learning but never afraid to try.”

Magsaysay served as an executive for fast food company Wendy’s for 10 years, and helped grow Mister Donut from 200 to 800 stores. For someone who’s accustomed to do tactical planning, he admits it was initially difficult for him to let go of control. But life has its way of teaching him the hard lessons—he had to undergo five brain surgeries, possibly exacerbated by biking.

“During the scan, my doctor found out that I had a broken neck; it healed by itself but not properly. Then, one injury I sustained through dirt biking most likely caused this hole in my skull, which probably caused the brain infections that led to hydrocephalus. They placed a tube in my skull to get rid of the pressure on my brain,” he reveals. 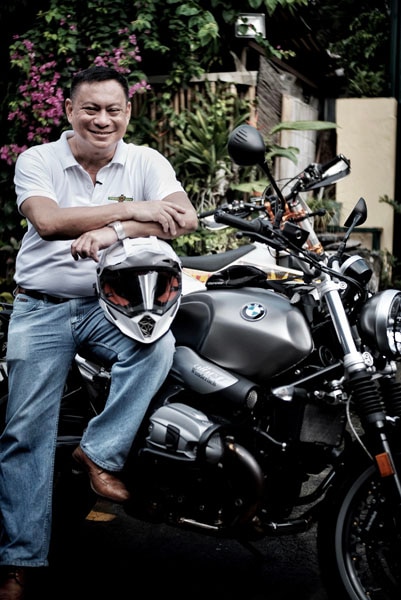 “My horizon is very short. I only live a day at a time. Before, I used to dream about five or ten years from now. Now, I just want to live for today,” says Magsaysay.

His first brain surgery made him realize that it’s time to surrender to his Creator, it’s time to let go, that he’s in control of his life anymore, that it’s time to let people take care of him. “I wasn’t used to being taken cared of. I was used to doing things, running things myself,” he confides. “So I dreaded those two weeks when I had to stay in bed, I wasn’t allowed to move, and someone had to clean me.”

He recalls that even before this life-changing event, his personal mentor had already advised him to prepare for retirement; he was 54 years old then. “My mentor told me, ‘You have six years before you’re 60. Why don’t use these six years as your runway so that by the time you’re 60, you’re not running anything, you’re just being taken care of by the companies that you invested in. So I followed that.”

He admits having survived five brain surgeries not only left a scar on his head but also led to a change in mindset. “My future is just one year in advance or even less because I don’t know what will happen to me. I might have another brain surgery. I might have another seizure or I might die tomorrow. My horizon is very short. I only live a day at a time. Before, I used to dream about five or 10 years from now. Now, I just want to live for today,” he says. Business-wise, he learned to think strategically, rather than tactically—that is, providing advice and guidance to Dom and the management, when needed. From the beginning, he recognized Dom’s strength in terms of operations, because of his background in running QSRs (quick service restaurants). So, knowing that the company is in good hands gives him peace of mind. “[From the beginning] I knew that we’re on the same page—we understood what the stores and operations needed, so I was comfortable immediately with Dom.”

Magsaysay also feels that the infusion of younger people like Dom to the Potato Corner’s workforce comes at a perfect time as it brought a new stamina and dynamism to the company. “For me, letting go of control is the best thing that I’m doing for Potato Corner. I’ve known the brand for 28 years, so I might be wrong already. The brand needs to evolve so that it can stay relevant for the next 28 years.” He decided to retire and finally cut ties with the company last August.

The former Potato Corner honcho shares his realization from his many talks with his psychotherapist and friends helping him to move on: “Dom will never be like me. I cannot make him like me. He is his own person. I have to realize that all I can do is tell him what I used to do and what Potato Corner used to be. He is his own man and I’m fine with that,” he says.

Photographs by Chris Clemente
This article is written by the Author in the by-line and was originally posted by Abs-Cbn News in their website which can be accessed at https://news.abs-cbn.com/ancx/culture/spotlight/10/02/19/learn-to-let-go-of-controland-more-lessons-from-the-bikers-behind-potato-corner