Binalot officers with members of Embrace, representatives from the local government of Nagcarian, and residents of Barangay Buhanginan enjoy a classic Pinoy boodle fight to celebrate the launch of the Eggciting Harvest Project. - CONTRIBUTED PHOTOS

The fruitful relationship between Binalot and Barangay Buhanginan in Nagcarlan, Laguna, started after the devastation of Luzon by Typhoon “Milenyo” in 2006. Harsh winds and heavy rains damaged most of the banana leaves which were being supplied to the fast-food chain.

“Banana leaves are very fragile and most of the trees and leaves were ripped by the strong typhoon. We were then forced to import our leaves from Iloilo but the costs were not sustainable. That was the time we decided to go straight to the source,” recounts Rommel Juan, CEO of Binalot Fiesta Food, Inc.

And so the search for the source started, leading Juan to the quaint town of Nagcarlan nestled at the foothills of the mystic Mount Banahaw in Laguna.

“Vendors in the market told me to go to Nagcarlan. I found myself visiting the markets and talipapa in that town, asking where the leaves come from. Locals pointed me to the dahunan in Barangay Buhanginan,” Juan says.

There, he met resident Rodney Oriel who then agreed to supply banana leaves for Binalot. What started as an initial order of 3,000 cut pieces of banana leaves evolved into a community livelihood program participated in by 30 families under Binalot’s CSR program dubbed Dahon (Dangal at Hanapbuhay para sa Nayon)—an ode to Binalot’s iconic banana-leaf packaging.

Banana is one of the most important fruit crops of the Philippines, with the country producing 9.36 million metric tons of bananas on 448,000 hectares of land. However, except for the export Cavendish variety, banana is grown largely in small farming communities in backyards such as in Nagcarlan, traded in markets by local entrepreneurs, and consumed locally.

Running for 13 years now, the Dahon program has provided impoverished banana farmers with an added opportunity to profit from the banana trees growing in their backyards while ensuring Binalot a steady and reliable source of banana leaves for all its stores across Metro Manila. ‍

Binalot, after all, is famous for its classic Filipino meals wrapped in a banana leaf—stamping the traditional Filipino brand in a modern fast-food setting. ‍‍‍ 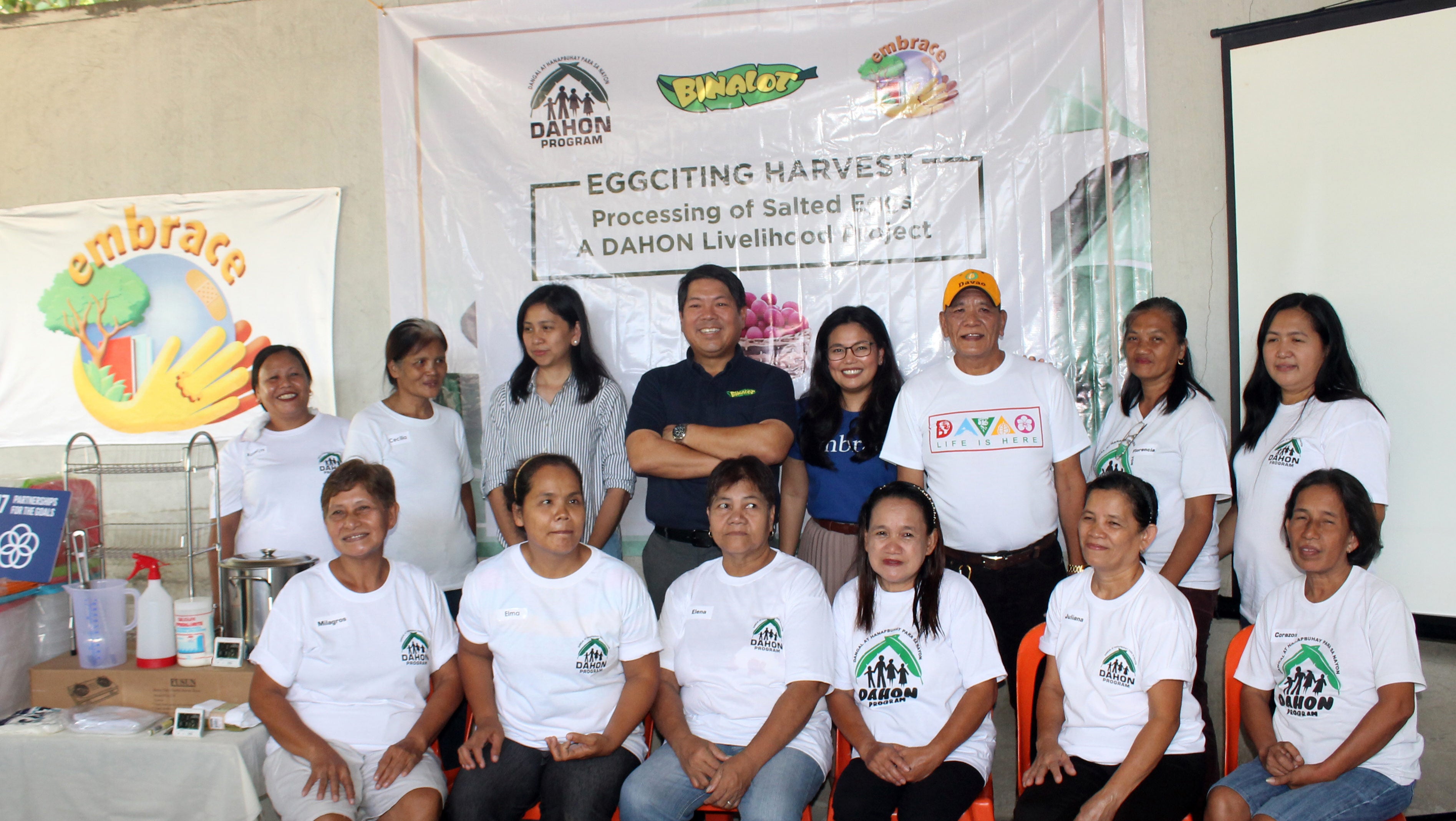 Running for 13 years now, the Dahon programhas provided impoverished banana farmers with an added opportunity to profit from the banana trees growing in their backyards while ensuring Binalot a steady and reliable source of banana leaves for all its stores across Metro Manila.

Oriel acknowledges DAHON for changing the lives of many families in the community. “Income was very difficult before as the supply of bananas from the wild trees was not steady year-round and work on the farm was not a regular arrangement.

Back then, we were lucky if we were able to eat twice a day. Today, we have more than enough to eat full meals and even merienda. I have been able to send my kids to school, two of them are in college now while the youngest is still in high school. We’re fortunate Binalot came knocking on our doors,” says Oriel.

But Binalot did not stop at the leaves. ‍

Recently, it has partnered with a program called “Embrace” to introduce salted egg production to Barangay Buhanginan and expand the economic benefits of the program to the farmers.

“We’ve thought of harvesting other vegetables and crops but we always hit a roadblock when it comes to finding a market for these products,” shares Irene Lucas, Binalot’s COO.

“Assessing our needs, we figured ‘Why not salted eggs?’ Looking at the volume of our consumption as each Binalot meal comes with one salted egg, we felt we found the perfect match for our banana leaves.”

‍In line with Embrace’s efforts to support the United Nations’ Sustainable Development Goals, Dahon acquired 10 salted egg starter kits and consulted the Department of Science and Technology on the production process for the Eggciting Harvest Project. The starter kits, which were recently awarded to the matriarchs in Barangay Buhanginan, would enable the community to supply Binalot with 1,000 trays of fresh and high-quality salted eggs for its stores every month while receiving additional income from the livelihood program in the comfort of their community.

“The success of Binalot’s CSR program lies in its sustainability, and the way it’s sustainable is because we are the community’s direct market. Banana leaves are our primary packaging and we have salted egg with every Binalot meal. As long as there’s Binalot, it’ll be a continuous partnership and that’s our commitment to the community of Barangay Buhanginan,” says Juan.

This article was originally posted by Business Inquirer which can be accessed at https://business.inquirer.net/286275/binalots-dahon-program-expands